Perhaps you are an avid baker, love to experiment with different types of baked goods, or you’re new to the game. You might be surprised by the sheer variety of flour in the supermarket and in recipes. With a large number of different types to choose from, you might not know where to start (Should you use bleached or wheat flour? What is the difference between all-purpose and self-raising?). In this article, we will help you distinguish all of the different kinds of flours, in order to ensure that your next food creation will yield the best results. Let’s get baking! 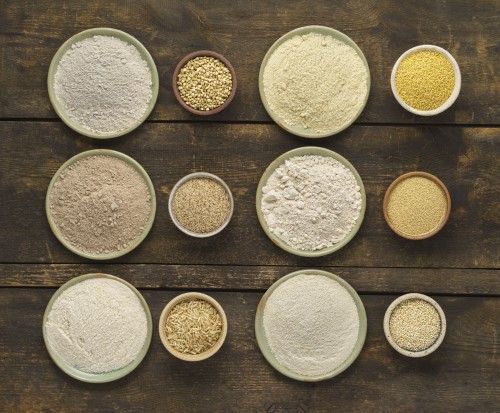 The most common type of flour seen in baking, all-purpose flour (also known as plain or cake flour) does not contain a leavening agent (used to make the flour rise). It is commonly used in bread and pizza dough.

Whole wheat flour is different from that of plain in that all of the grain is used, rather than filtered even further like refined flours. That said, this particular flour contains more vitamins and minerals, including iron, fiber, and calcium. While it’s a better alternative to white flour, it also has a shorter shelf-life, thus requiring you to use it up quickly, or to find a way to store it.

Commonly used in pumpernickel and sourdough bread, rye flour has less gluten than wheat flour, but is higher in fiber. It also tends to grow better in poorer soils than that of cereal grains.

For those who have gluten allergies, using almond flour is a good alternative to plain flour, as it does not have gluten in it. Almond flour is one of the main ingredients used in desserts like French macarons.

Buckwheat is popularly used to make pancakes in the United States, as well as crepes in France and blinis in Russia. It is also gluten free so people with celiac disease or gluten allergies can consume dishes with buckwheat flour.

Corn, or maize, flour is commonly seen in cuisines from the southwest United States, as well as Central America and India. Its coarse, grainy texture is excellent for making tortillas and tamales.

Potato starch flour is created by crushing potatoes and extracting starch in the process, which is then washed out and dried. It leaves behind a white powder, which is used as a thickening agent. It is commonly used in kosher foods, Asian cuisine, and sponge cake.

Taken from the cassava plant, tapioca flour is used to make dishes like tapioca pudding (popular in Africa and Asian countries).

Also known as sticky rice, glutinous rice flour is used in many East and Southeast Asian cuisines, in both sweet and savory dishes.