It’s that time in the year when mother nature can’t decide between hot or cold. The transition from one season to another is the biggest flu season. You could take some pain pills but you want to take care of your body, not cause other problems while trying to take care of one. This is why natural ingredients and holistic remedies are the best choice. Take the ginger root for example, it is a miracle root capable of healing the body from the inside out. 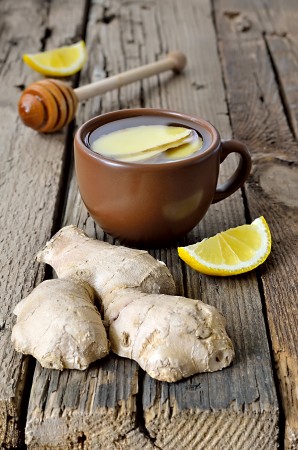 A weak immune system makes you more vulnerable to the flu. According Ayurveda medicine, which is an ancient Indian form of healing, ginger is a powerful immune booster. It warms the body and rids the lungs and sinuses of toxins. Ginger has also be found to activate T-cells which white blood cells that can hunt down and destroy infected cells.

Being sick can also cause nausea. Ginger contains lots of anitoxidants that get rid of free radicals and allow your body to heal from a cellular level. Chewing raw ginger or drinking ginger tea can help alleviate any feelings of nausea. It can also stop vomiting. When you’re feeling a bit chilling laying in bed with the flu, make a cup of ginger tea to keep your body warm and relieve any uncomfortable pain.

The natural spiciness of ginger can open up nasal passages and ease congestion. Use ginger in a steam by adding some ginger powder to hot water with some lemon and holding your head over the pot with a towel over you to keep the steam trapped.